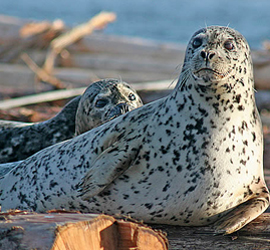 Flora and fauna of Beringia are unique and diverse. Scientists and adventurers from different countries dream of visiting this part of the world, and many go a great length to get here. They are attracted by the hundreds species of plants and animals, the splendor of the mystical tundra landscape. The wild nature is still the full owner of this land, which humans learned to share with other inhabitants. Would you like to watch grey whales and orcas from your window? Or to walk along the seashore in springtime, gazing at spotted seals sunbathing on one Chukotka’s scenic beaches? The fish is plentiful here. And even the cranes walk in couples, unafraid of humans.

Not far away from the seashore are widgeons, oldsquaw, herring gulls, hovering over the waves. Hares and foxes are common: although one is always weary of the other, both remain trustful toward people. The plethora of wildflowers, abound during the short Arctic summer, never fails to delight us with its stunning, nearly intoxicating beauty. The proximity of nature and humans is evident in the everyday life. All these dream-like experiences are reality in the magnificent Beringia Park.

Information about the park

History of the Bering Land Bridge.


“Stretching over the eastern part of the Chukchi Peninsula, Beringia lies at the major crossroads for many marine and terrestrial organisms, which play a critical role in global ecosystem processes and evolution of life on Earth”.

(from N.M. Zabelina “The Development of the National Park in Russia”).

History of the “Beringia” park.


The idea of creating an international park in the region of the Bering Strait was first proposed in the 1960s. From the beginning, the Park’s vision acknowledged that spiritual values and ways of life of the indigenous Chukchi and Yupik Eskimo people work hand-in-hand with the goals of biodiversity and ecosystem conservation.
3


The Beringia Park is situated on the Chukchi Peninsula, Russia’s Farthest Northeast. It occupies the territory of two administrative districts of the Chukotka Autonomous Region: the Chukotskii District in the north of the Peninsula and the Providenskii District in the south. The Park’s territory, including its coastal and inner waters, totals 7544704.3 acres.

Inhabitants of the park