Population – 15184 (according to 2001).
They live in Enurmino, Inchoun, Uelen, Lavrentiya, Lorino and Yanrakynnot.
The Name arose from the tundra Chukchi – chauchu, chavcha-vyt – “rich with reindeers”. The seaside people called themselves ankal’yt – “coastal people”.
Emphasize themselves from the other tribes they used the name lyo’ravetlyan – “real people”. A written language was created in 1931 based on Latin letters, replaced by the Russian alphabet in 1936.

The Chukchi — inhabited the interior regions of north-east Siberia from prehistoric times. They are the representatives of a reindeer herder and fishermen culture. The Chukchi were divided into 2 groups – nomadic reindeer herders of the tundra and the settled hunters of sea mammals along the coast – each having their own economy. The first group had reindeer herding as its economic base, the other one sea mammal hunting. Fishing, hunting, and gathering of edible plants were supplemental.

Nomadic and settled Chukchi had different forms of handicrafts. Women processed fur, sewed clothes and boots, and weaved bags from plant fibers. They liked to bead and made patchwork from seal skin. Men were fond of bone and ivory carvings. Reindeers were the main mode of transportation on snow. People also used sledges for different purposes: to carry goods, children (kibitka), and yaranga frames. To walk on ice and snow Chukchi used snow-shoes. If anybody went to the sea he used whale boats and kayaks to travel the sea.

Nomadic camps usually consisted of 10 yarangas and stretched from the West to the East. The northern camps included several patriarchal communities. There were between 2 to 4 families in every community. Settled Chukchi lived in similar communities, where each group had its own dwelling.

Clothes and footwear of the tundra and coastal Chukchi resembled the Eskimo garments. Winter clothes were sewed from two layers of reindeer skin (inside and outside skin). Coastal Chukchi used seal skin and sewed waterproof trousers and boots from seal skin. 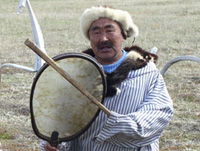 The main festivals were connected with the subsistence cycle. The nomadic Chukchi celebrated the slaughter of reindeers with a feast. Eskimo and coastal Chukchi had similar festivals: the kayak festival during the first outing in spring. In summer they celebrate the end of the seal hunt. The Sea Master feast was celebrated in autumn. During the celebrations people had contests in running, shooting, and free-style wrestling. They took part in reindeer and dog sledge competitions and played the yararas, a round hand-held drum which is still a sacred family object, its sound symbolizing the “voice of the hearth”.

Nowadays, sea mammal hunting is prevalent among the communities of eastern Chukotka. Cultural differences between nomadic and coastal Chukchi are slowly disappearing, while contact with Russians and people of other nations is increasing. In addition, there are many mixed marriages. Students study Chukchi language till the 8th grade (14-15 years) in local villages. The system of national education is absent.